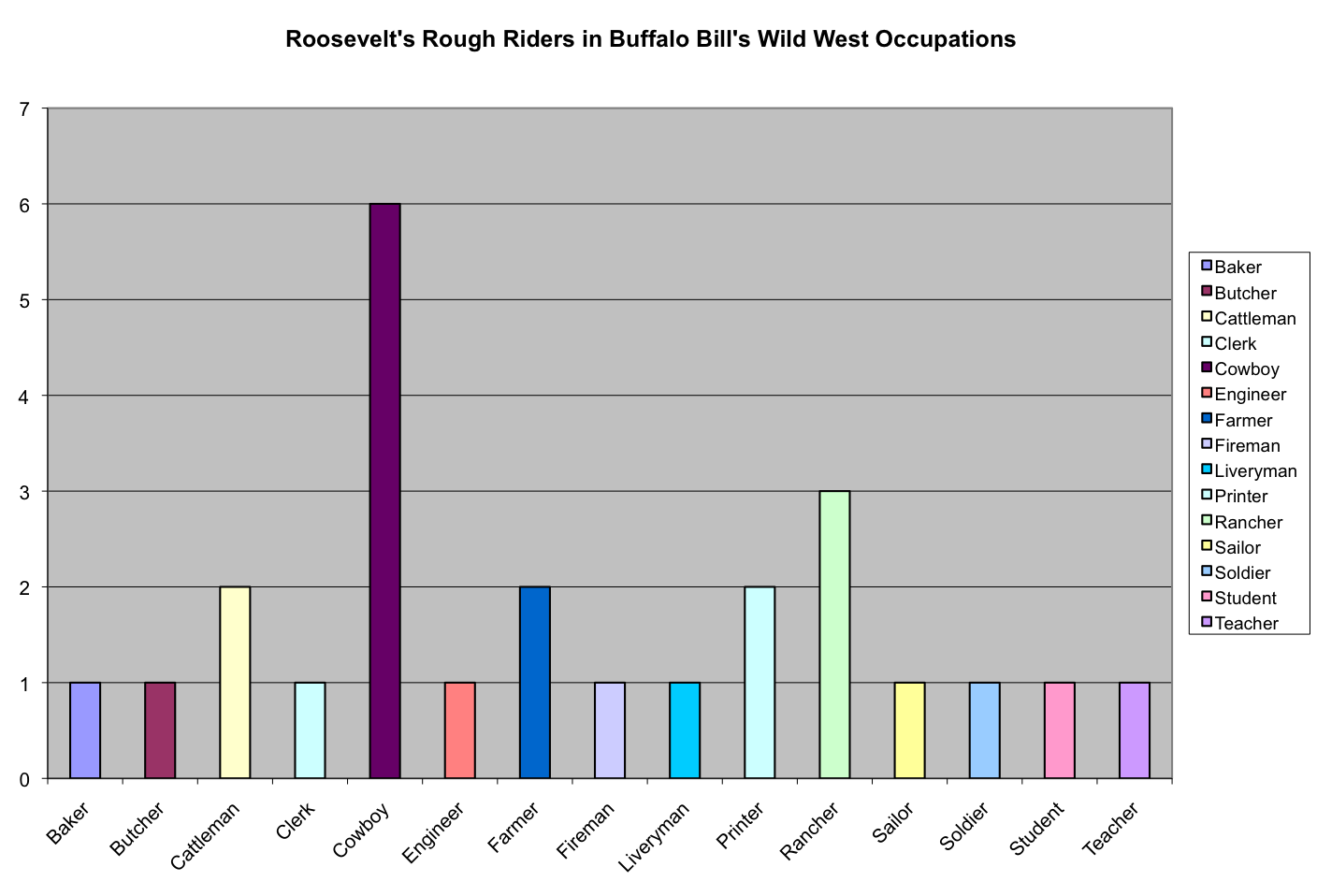 This graph above shows the figures for listed occupations of members of Roosevelt's Rough Riders in Buffalo Bill's Wild West and Congress of Rough Riders of the World. 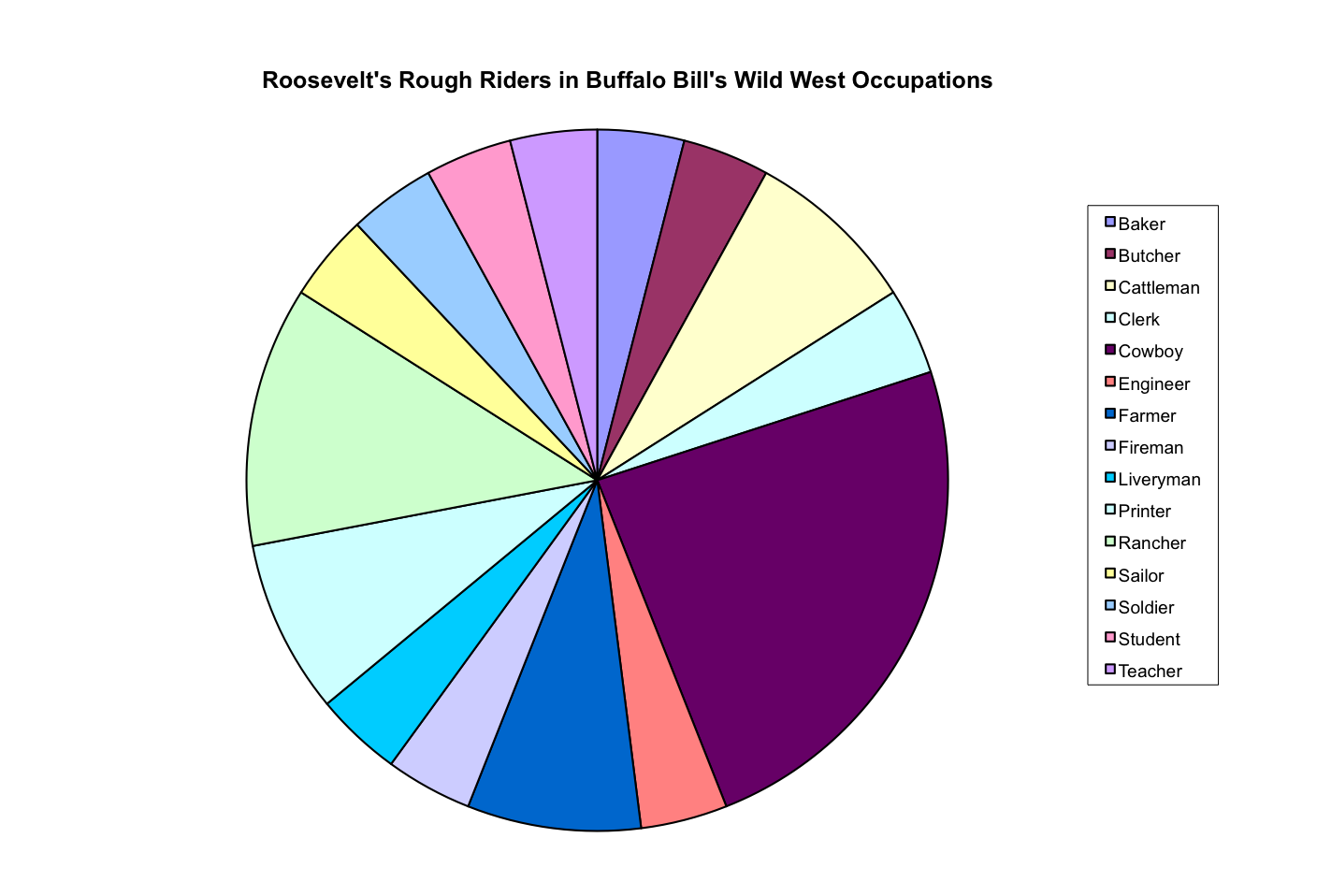 The pie chart highlights the percentages of various occupations of Roosevelt's Rough Riders in Buffalo Bill's Wild West and Congress of Rough Riders of the World. Notice that the cowboys, ranchers, and cattlemen, all of which could be grouped into "Western frontiersmen" comprised approximately 45 percent of the troupe. 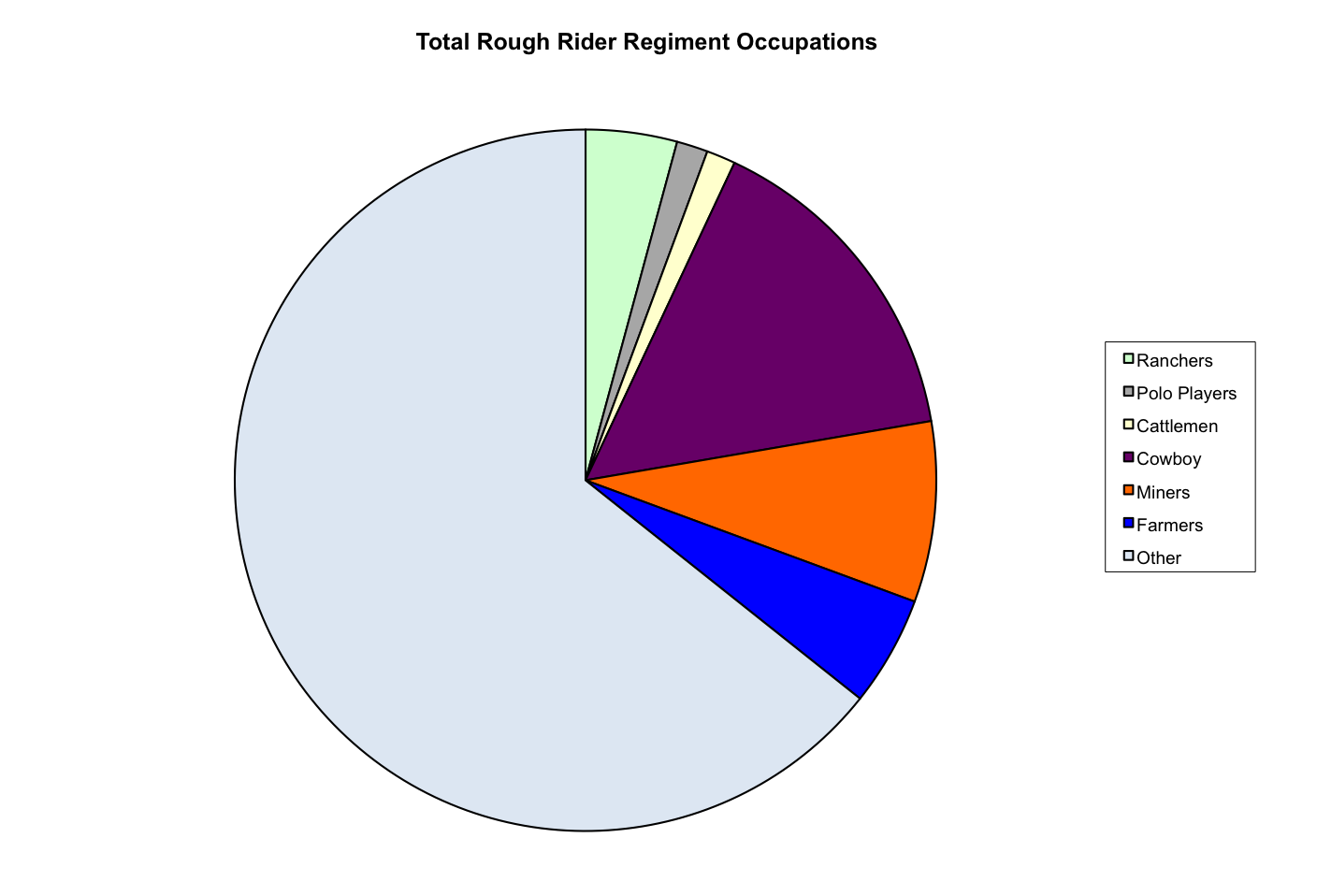 The pie chart shows the total occupations of Roosevelt's Rough Riders. Notice that cowboys, ranchers, cattlemen, and miners make up only 28 percent of the entire regiment.

The term Rough Riders, brought into general usage and familiarity by Buffalo Bill and the Congress of Rough Riders of the World at Chicago in 1893, indicated the hardy and martial character of both "equestrianism and the men identified" with the performance. Promotional materials suggest that the name of Rough Rider largely represented the First United States Volunteer Cavalry, "that the name was naturally transferred to and fitted it like a glove." Due to the naming of the Volunteer Cavalry, as the Rough Riders, members of the regiment became recognizable by the public as brave, fearless, strong, athletic, and equestrian men. The connection between Buffalo Bill, the naming of Roosevelt's Rough Riders, and the addition of the Spanish American War heroes to the Wild West and Congress of Rough Riders of the World highlights a commitment to portraying a type of American manhood. In much of the press coverage about the regiment and particularly in the early history represented in the Wild West, the men in the regiment are described as having physical prowess, unqualified bravery, premium equestrian skill, ice-water in their veins, and the intelligence to carry out orders. This perfectly resembles the image of the "true American frontiersman," or Western American man that Buffalo Bill Cody articulated.

In examining the occupations of the men who made up the Roosevelt's Rough Riders one can understand the type of man that the public associated with the regiment and its actual composition. Men of many occupations comprised the ranks, but according to The Rough Rider illustrated periodical, the three main types were the cowboy, hunter, and miner, as "there could be no better material for soldiers than that afforded by these grim hunters of the mountains, these wild, rough riders of the plains, some of whom had served on the frontier...." The majority of the men did come from the Western territories of New Mexico, Arizona, Oklahoma, and Indian territory. However, the occupations of the men do not appear to match up to the public image. While cowboys made up the single highest occupation with 160 registered, they only constituted approximately 15 percent of the total regiment. Furthermore, only 6 hunters are recorded amongst all of the rough riders while miners constituted the second highest occupation with 87, approximately 8 percent, ranchers 4 percent, and cattlemen 1 percent. As for Roosevelt's Rough Riders who performed in the Wild West, there were 6 cowboys (24 percent), 3 ranchers (12 percent), 2 cattlemen (8 percent), 0 miners and 0 hunters. These figures appear to add to the idea that the press and Buffalo Bill's promotional staff grasped onto the idea of the regiment as Western cowboys and portrayed them as such. In the performance of San Juan Hill and in the Congress of Rough Riders, Roosevelt's group rode on horses and demonstrated their superior fighting prowess as the premium western man; these men, according to Wild West promotional materials, epitomized the image of American manliness in a national and international setting. In analyzing these figures, one can understand the manly image that Buffalo Bill's show sought to portray. The reality did not exactly match up; however, the public, from the end of the Spanish American War to the present, associate the Rough Riders with western equestrians and the ideal man according to Buffalo Bill.