Jason A. Heppler and Douglas Seefeldt

Visual images produced by the Wild West Show shaped ideas about Native Americans. While Show programs, newspaper articles, correspondence, and other text–based materials were important, visual images likewise shaped public perceptions and were perhaps more widely disseminated than text. The image of the Wild West Show drew from a common well of publicly–held perceptions about Indians and were viewed by millions of people. The promotional posters can be read not only for what they say about Indians as objects in the Western story, but as subjects in image making.

American Indians were commonly portrayed as antagonists in the visual story, often showing an attack on settlers, ambushing stagecoaches, or historic battles. Other images celebrate the dying Indian, a perception most Progressives would have found symbolically significant. Yet other posters emphasized Indian individuals and portrayed them with dignity. 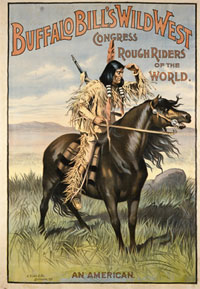 Portraying an American Indian on horseback upon a grassy knoll, he looks into the distance. Decked out in buckskins, feather in his hair, and carrying a rifle, he carries the traditional and the modern on his person. The title "An American" portrays the Indian as a representative American. In the context of other promotional posters that identified performers by nationality—cossacks, Mexicans, Arabs, Germans—an Indian becomes uniquely American. 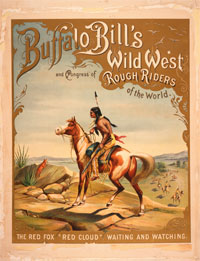 Famous for his military achievements against the U.S. Army, Red Cloud is atop a horse overlooking a prairie landscape. The poster informs viewers that he is the "Red Fox," and likewise shows a fox overlooking the landscape as well. Red Cloud is viewed as cunning and swift, always alert and watching for danger or opportunities. Behind him are Native warriors on horseback, armed with rifles and awaiting orders from their leader. 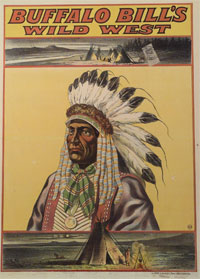 An anonymous, stoic Native American stands in portrait. He wears a feather headdress and ornaments considered traditional Indian styles. The picture is framed with scenes of village life. The presence of tipis suggest the tribal affiliation of the Indian is Sioux. The poster suggests to its viewers that Buffalo Bill's Wild West promises to deliver a depiction of tribal life on the Plains. 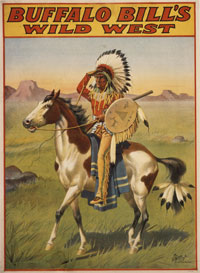 An anonymous Indian sits atop is blanketed horse, donning buckstins and a feather headdress. He looks off into the distance. Carried with him is a rifle, mixing the traditional and the modern together in the portrait. The Indian perhaps looks forward to a future beyond his tribal lifestyle, the ultimate hope of Progressive reformers. 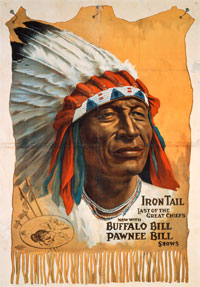 By the turn of the century, Show Indians had become trademarks for Buffalo Bill's Wild West. Iron Tail is depicted as a celebrity, recognizable by his profile. After being credited as the model for the Indian Head nickel issued in 1913, Iron Tail was the exhibition's star performer as well as famous apart from his role with the Wild West. Unlike Sitting Bull who gained fame through military accomplishments, Iron Tail achieved fame through his impression on American currency. 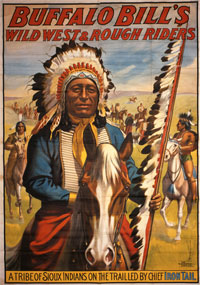 As above, Iron Tail is the celebrity of this poster. Pictured atop a horse with a backdrop of other horse–mounted Native Americans, Iron Tail and the "tribe of Sioux Indians" that accompany him are not the threatening depictions of "savage" Indians. Instead, the Indians are marching peacefully across the Plains. The expression on Iron Tail's face is not threatening or menacing, but inviting and casual.

A wagon caravan pulled by horses are assaulted upon by attacking Indians, while defenders try and hold them off. To the right and offset from the scene stands Buffalo Bill, dressed in buckskins atop a horse. Rather than merely an illustration of attacking Indians, the post instead illustrates a variety of spectacles audiences would expect to see in the exhibition — Indian village life, the equestrianism of Native Americans, settlers facing the frontier, and Buffalo Bill himself. The Indians are depicted riding bareback and barely clothed with feather bonnets on their heads. At least one is in the act of shooting at the wagon train and are the most colorful figures in the engraving. The Indians are pictured in profile and viewed as exotic, not as individuals.